One of the Worst School Shootings Happened in Pakistan 2014

On 16 December 2014, six gunmen affiliated with the Tehrik-i-Taliban Pakistan (TTP) conducted a terrorist attack on the Army public school in the northwestern Pakistani city of Peshawar  The militants, all of whom were foreign nationals, included one Chechen, three Arabs, and two Afghans, entered the school and opened fire on school staff and children. They killed 149 people including 132 schoolchildren, ranging between eight and eighteen years of age, making it the world’s fourth deadliest school massacre. A rescue operation was launched by Pakistan’s Army’s Special Service Group  (SSG) special forces, and they killed all six terrorists and rescued 960 people.

The attack began at around 10:30 A.M. when seven gunmen, wearing explosive belts entered the school after having scaled the walls. Before entering the school, the gunmen set fire to the Suzuki Bolan ST41 van in which they had arrived to create a distraction. The terrorists, bearing automatic weapons and grenades, moved straight toward the auditorium located at the center of the complex and opened fire indiscriminately on the children who were gathered there for first aid training. The terrorists did not intend to take any hostages but instead wanted to kill as many pupils as they could. As the terrorists opened fire, many of the pupils ran toward the two exits on the other side of the auditorium, but many of them were gunned down in the garden. 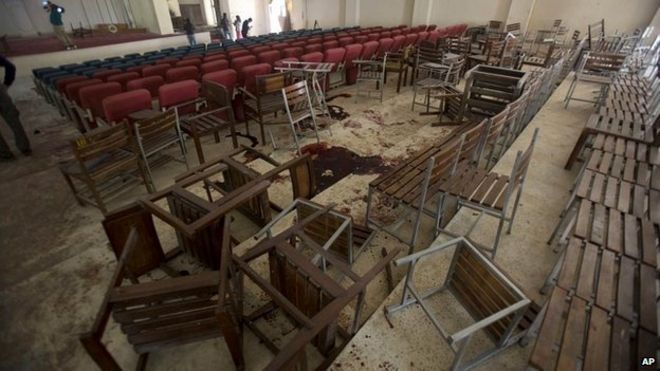 Reports surfaced that pupils were forced to watch teachers, including principal Tahira Qazi, be killed in front of them. Within 15 minutes, the SSG teams had stormed the school and entered the premises from two sides in their heavy armored vehicles and trucks. Immediately, the SSG personnel engaged the terrorists, preventing them from going after and killing other remaining teaching staff and students. The gunmen moved to the administration block of the school and took hostages there. One of them was shot by the military personnel near the auditorium, while the other five managed to make it to the administration block. Army Medical Corps in military armored vehicles were rushed to the school, Army Corps of Military Police and the provincial civilian Kh (KP Police) worked toward closing off any potential escape routes for the terrorists. 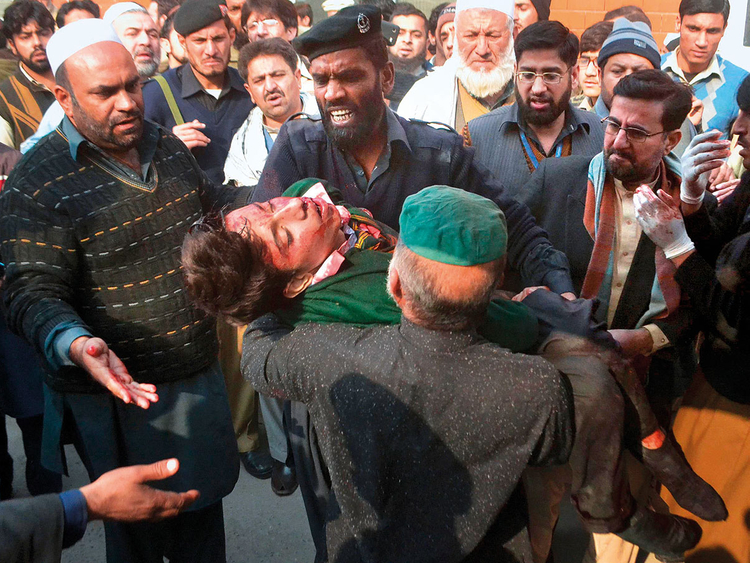 Meanwhile, the SSG commandos had reached the area and surrounded the administration block. Most of the operation took place in the attempt to clear this block and rescue the hostages taken by the gunmen. Special teams of snipers and their spotters pinpointed the terrorists; one of the six attackers was killed by the snipers from the windows and air vents, while the other three were killed when the commandos stormed the building and rescued the remaining hostages in the process. Seven commandos, including two officers, were injured in the battle.

An estimated total of 1,099 pupils and teaching staff were present on the school premises. Responding forces were successful in rescuing approximately 960, though 121 were injured. More than 150 people were killed, including 134 children and school staff members. The attack sparked widespread reactions in Pakistan, receiving condemnations from the public, government, political and religious entities, journalists, and other members of Pakistani society. Pakistani media responded very strongly to the attack, with major newspapers, news channels and many commentators calling to take strong action against TTP.

Ayesha Rana is a sophomore at ANS. She recently joined our school from Pakistan and enjoys writing about world news.